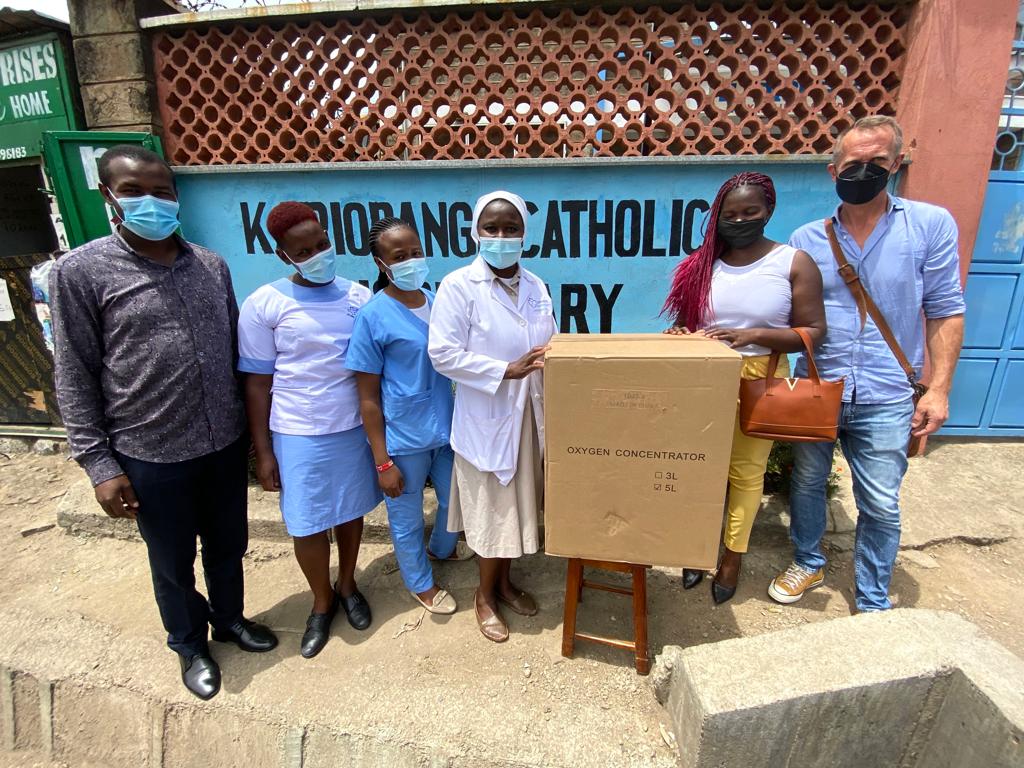 Jubilation rendered Kariobangi Catholic Dispensary when Techub came calling with an oxygen concentrator machine in mid-February this year. Beyond being a link for Africa and the Scandinavian countries, Techub is a trailblazer in the realm of corporate responsibility.

Since its outset, Techub has been championing philanthropic model which involves giving one percent of the resources at hand to the communities we operate in. From manpower, financial to resources, the list is endless.

Year on end, Kariobangi Catholic Dispensary led by Sister Ruth Tuitoek, and Josphat Ng’ang’a the administrator, has been struggling with its old oxygen machine that would break more often when least expected. In 2019, a critically ill infant was rashly brought at the dispensary and needed to be put on oxygen as they wee waiting for an ambulance to refer the child to a higher health facility, the child died due to lack of oxygen the oxygen concentrator had broken down, this necessitated the purchase of a small oxygen cylinder to ensure availability of oxygen when need be. It has been expensive for the Dispensary to maintain a cylinder as compared to an Oxygen Concentrator.

Kariobangi Catholic dispensary, patients remain at the fore. Today, the health centre is at forefront of providing the much needed care by the people.  The dispensary situated in the heart of one of Nairobi’s biggest urban slums, continue to braved it all, whilst serving the underprivileged community it operates in regardless of one’s financial status. Last year alone, it was able to serve over 44,000 patients.

The dispensary run by Comboni Missionary Sisters (CMS) who were founded by Saint Daniel Comboni, first opened its doors in 1979 as a clinic in the Parish side office when the sisters sensed a need for healthcare services among the population then, as need for services grew, it was relocated to the Parish library and later in 2000, with the support of Christian Association and other donors who near and far in time and space were the good Samaritans who enabled the construction of the current premises where the Dispensary operates from to provide curative and preventive quality healthcare services affordable to the needy people in Nairobi’s Eastlands region.

From the outside perspective, one might rubbish the health facility. But a lot goes on inside there. The services offered are top notch despite the limited resources they have. Nothing is left to go to waste including the space.

The pharmacy is well stocked with essential medicines, the x-ray room is well insulated preventing radiation from affecting the radiographer in charge, the antenatal room is well equipped with the ultra sound machines, three consulting rooms with clinicians on the standby not to mention the nurses, a public health officer, a nutrition specialists, a nurse aide and three laboratory technicians who are highly trained and continue to receive the training to be at par with their colleagues in the health industry among other things. Undeniably, the health facility is living to its mission and vision owing to the number of people that frequent the facility.

Volunteers and charitable donations play a critical role in its operations. Most of the equipment including the building that house the dispensary is as a result of donations from Christian Association and Barceló among others who had donated. Besides, the health facility has cordial relations with health workers within Nairobi who offer their services on locum basis to relive some staff or when there are many patients at a small fee when need be. In fact, on the day Techub visited the health centre, there was a laboratory technician from Nairobi Hospital one of Kenya’s leading hospital who was standing in for her colleague who was away. This shows the level of services rendered at the institution.

However, challenges are synonymous with human nature and Kariobangi Catholic Dispensary is not exempted. Besides the oxygen machine, the dispensary has witnessed critical funding cuts in recent years which has been worsened by the ongoing Covid-19 pandemic. For instance, in 2016, the dispensary was forced to close down for three months due to financial challenges. Eventually, it reopened after raising some funding for the smooth running of the its operations.

Services at the tuberculosis laboratory were halted by the Kenya Medical Laboratory Technicians and Technologists Board (KMLTTB) due to lack of a functioning Bio Safety Cabinet class. According to Sister Ruth Tuitoek the sister in charge and Josphat Ng’ang’a, the dispensary administrator, the health centre used to receive quite a number of patients with tuberculosis related cases before it was shutdown. The Bio Safety Cabinet class 2 is estimated at ksh. 600,000 (USD 6000) which is a dream come true to the health centre.

The laboratory though is fully furnished with the state of the art haemogram machine, it still in need of barcoding system and electrolytes analyser to become modern, and ease the work of medical laboratory technicians.

The health centre is also in urgent need of a self-contained medical refrigerator and freezer units for storing vaccines meant for immunization of under five children. Presently, the dispensary is forced to use the normal refrigerator that need frequent temperature adjustments to the required standards. Sometimes, the dispensary encounter challenges like temperatures going down to zero degrees forcing them to stop the immunization and taking the vaccines back to the sub-county depot. Mothers get heartbroken when they end up not getting the services they had come for. Lastly, the centre is also appealing for the portable vital signs monitor.

Meanwhile, the dispensary has resorted to charge the patients a little consultation fee for self-reliance whilst serving the community without the upheavals. Today, adults part with ksh. 100 ($1 and children ksh. 50 ($0.5) respectively.

But it is still uncertain time for Kariobangi Catholic Dispensary as the community where it operates in faces huge challenges in accessing healthcare. Techub has shown the way with an oxygen concentrator machine. The health centre believes that your support will help it further its mission and vision. Tuberculosis is never fair. There is a growing inequity in our society placing the most vulnerable at the highest risk. Vaccination too plays a key role in child’s growth.

Techub believes that when company revenue continues to grow, social impact initiatives should not be at odds with each other. Let’s come together and stock Kariobangi Catholic Dispensary with Bio Safety Cabinet, medical refrigerator, the portable vital signs monitor, barcoding system and electrolytes. For your donations, please contact Techub through info@techub.no.