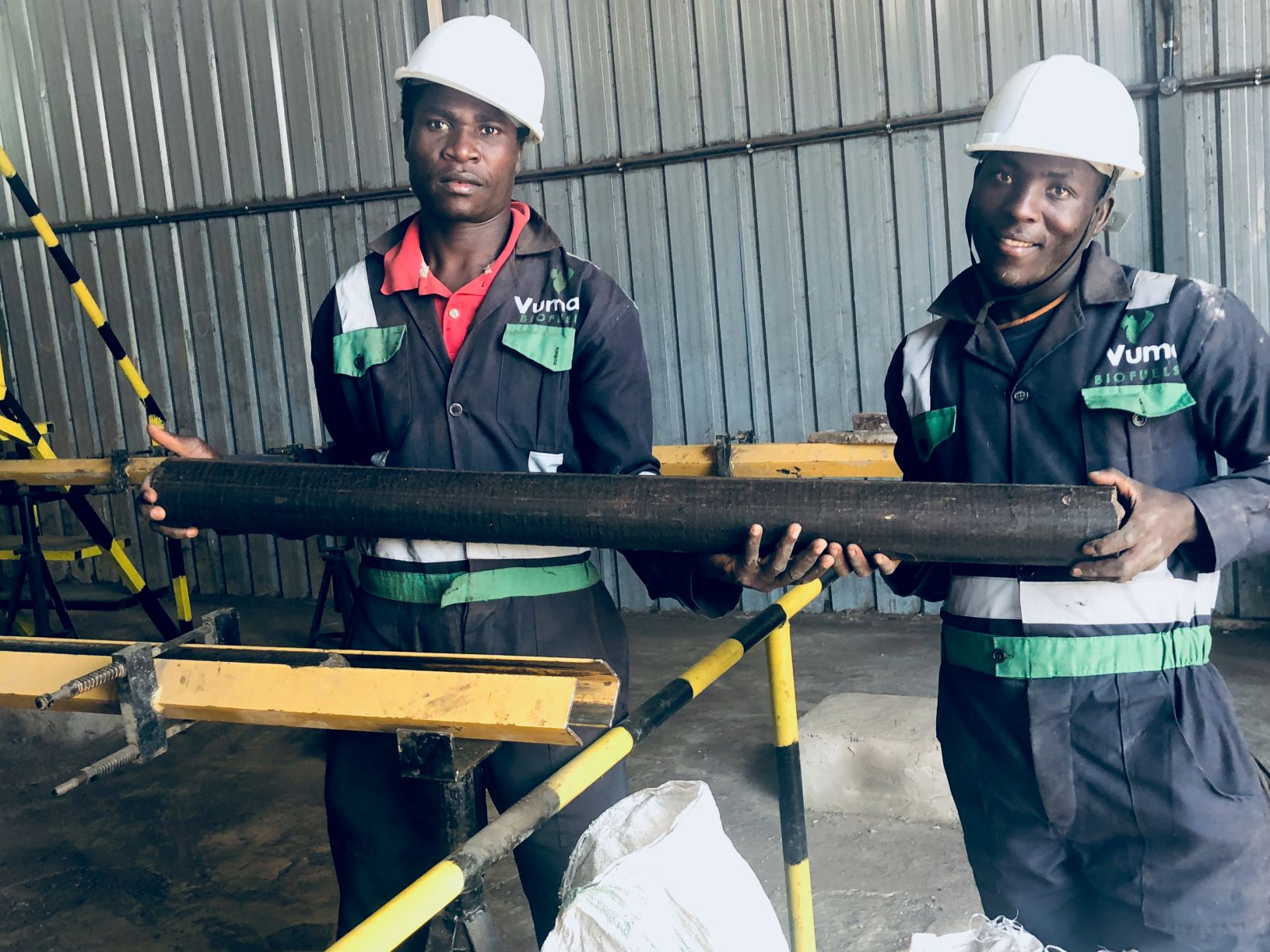 Sugarcane is the top agricultural commodity in some parts of Kenya with nearly five million tons produced annually. As a result, a lot of waste is generated. Once cane is crushed and pressed for its juices, about 30% remains as a biomass residue waste called bagasse. This bagasse by-product is typically not used mostly by sugar companies in Kenya. Instead it piles up in mountains outside of the factories, and increasingly pose an environmental threat.

The sugarcane wastes caught the attention of Ian Otula and Aaron Pattillo the co-founders of Vuma Biofuels. Today the company has seized the opportunity to turn this agricultural waste into energy. They are working hand-in-hand with sugar industries in western Kenya to produce sustainable biomass briquettes —they call “VumaBriqs” – from discarded sugarcane husks. In turn, these are sold to industrial plants including tea factories, dairy producers, and textile makers as a replacement for conventional firewood used as fuel in large boilers.

Vuma’s journey dates back when Ian Otula, and his friend while in High School developed an idea to carbonize sugarcane waste and turn it into a charcoal-like product that could be used by households. The idea later landed Ian at Watson Institute in Boulder, Colorado where he met his co-founder Aaron Pattillo. The two embarked on pressure testing various aspects of the idea and the market. Simultaneously, they pivoted the initial concept and began to pursue a simpler non-carbonized product that could be sold ‘Business-to-Business’ rather than ‘Business-to-Consumer.’ Nearly a year later, after refining the product and researching the market, they decided to go “all-in” and build their own factory from scratch –Vuma Biofuels.

Currently, the company is addressing the challenge of how to sustainably meet the energy needs of Kenya whilst taking into account conservation, climate change, and sustainable development. At present, two-thirds of the total energy supply in Kenya comes from trees used as charcoal and ﬁrewood. However, the increasing demand for energy combined with the decreasing supply of sustainable forests has created a wood fuel crisis in Kenya. The three-fold deﬁcit of supply to demand has driven illegal timber harvesting and fuels rampant deforestation. In contrast, major sugarcane millers in Kenya generate 100+ tons of excess agricultural waste per day. Vuma’s value proposition is to turn unused waste into a sustainable energy product-VumaBriqs that help meet the energy deficit.

The conversion of discarded sugarcane husks into VumaBriqs begins with collection of bagasse from the largest sugarcane processing factories in Western Kenya. Thereafter, they undergo an advanced and proprietary nine-step production process that dries, mills, filters, and densifies the waste into solid mass combustible fuel source.

VumaBriqs have high density offering more concentrated form of energy than firewood. The compression process allows the briquettes to burn longer and cleaner, emitting no smoke, soot or carbon deposits. Further, the briquettes do not emit harmful gases or toxic chemicals like Sulphur in the air. Lastly, they have fifty percent higher calorific content than the conventional firewood. In essence, VumaBriqs are a superior alternative to firewood, especially to industries and institutions that are otherwise burning conventional wood fuel.  Vuma Biofuels has focused on delivering high customer service, product quality, community engagement and robust company culture. The company has plans to rapidly scale its operations to meet demand, and aims to be the largest supplier of biomass fuel in East Africa in the coming years. If you wish to engage Vuma Biofuels for any potential collaborative initiative, please contact Techub through info@techub.no. Follow us on social media platforms